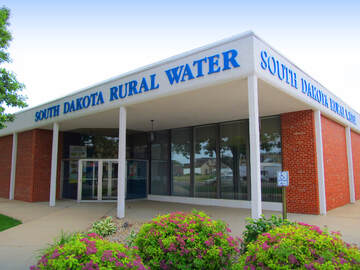 Discussions about rural water began in South Dakota in the late 1960s. By 1972 Butte-Meade Sanitary Water District and Rapid Valley Water Service Company were established and a number of systems were organizing. Lincoln County Rural Water, south of Sioux Falls, was under construction at the time.
Rural water enthusiasts met in Madison, South Dakota, on October 11, 1972. A decision was made to hold a statewide meeting in Pierre on November 30. A letter of invitation went out to 17 systems. The following systems were represented at the November 30, 1972, meeting at the King’s Inn in Pierre: Aurora-Brule, Big Sioux, Brookings-Deuel, Minnehaha, Rapid Valley, Sioux, TC & G, and Tripp County.

It was unanimously decided to form a “Steering Committee” and name it the “South Dakota Association of Rural Water Systems.” The purpose of the organization was to monitor legislation, avoid duplication of efforts by sharing problems and solutions, and communicate with state and federal agencies concerning funding and regulations. The Association operated as a Steering Committee until January 1976, at which time the State of South Dakota granted a nonprofit corporation charter.

In April 1982, the Association expanded into water system technical assistance. Water treatment and distribution system on-site expertise could now be offered to the many smaller systems. In 1991, with the inclusion of Sanitary Districts, a Wastewater Technician position was added, moving the association forward in its work of preventing water pollution.

As the Association continued to grow and increase in membership, the Board of Directors expanded the Association for the purpose of assisting systems in western South Dakota by establishing the West River Regional Office in January 1991. The West River Office extended benefits and services to members statewide.

The Association is showing growth and movement toward set goals. SDARWS has grown from 2 to 13 employees and has expanded its membership to include nearly 300 organizations. With continued support from members, the challenges and opportunities of the future can and will be met with enthusiasm and cooperation. In February of 2010, the Association returned to Madison where it all started at that meeting in 1972 when an office building was purchased as a headquarters. In 2014 a second office/storage space was purchased in Spearfish as a West River headquarters.
National Rural Water Association Recognition